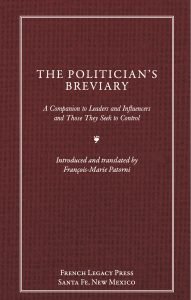 It is indeed important to know everything, to hear everything, to have spies everywhere, … do it prudently, because people become offended when they know they are being spied on. Spy on them without them knowing. (Breviary, p. 49).
It’s no secret that the government keeps too many secrets. (Often quoted).
Spies are more prolific than ever. (FBI website).
“The very word ‘secrecy’ is repugnant in a free and open society; and we are as a people inherently and historically opposed to secret societies, to secret oaths, and to secret proceedings.” (President Kennedy, Waldorf-Astoria Hotel, New York City, April 27, 1961).

As long as the few wield power and influence over the many, the Politician’s Breviary will benefit those concerned by dissimulation, deception, subterfuge, maleficence, greed, and corruption.

This first translation into English of the seventeenth-century Breviarium politicorum draws inspiration from the legacy of Cardinal Jules Mazarin, King Louis XIV’s mentor and prime minister. The original 1684 Latin edition was attributed only to an anonymous author, and subsequent editions over the following decades captivated readers as had Machiavelli’s The Prince a hundred and fifty years earlier. Yet, the Breviary’s principles and maxims that unveil how to achieve and retain power are even more relevant to guide today’s leaders and politicians.

SCROLL DOWN FOR CONTENTS

INTRODUCTION
THE POLITICIANS’ BREVIARY
TO THE READER
FUNDAMENTAL PRINCIPLES

PART ONE
KNOW THYSELF
KNOW OTHERS